14 Things That Can Ding Your Credit Score 26 More Sears and Kmart Stores to Close by October
MoviePass Pulled Dirty Tricks on Customers to Save Money Now They're Developing Cow-Free, Lab-Made Dairy Instead of Returning Goods to Amazon, He Sent Boxes of Dirt and Scammed $370K Don't Charge Your Laptop to 100% to Extend Battery Life How Much RAM (Memory) Does Your PC Really Need? All the Commands You Can Give Google Home/Assistant United Airlines Cracks Down on Hidden City Ticket Savings Amazon Rules May Have Forced Sellers to Raise Prices Most Fast Food Veggie Burgers Cooked on Same Grill as Beef Comcast Adds New $20 Monthly Mobile HD Streaming Fee Amazon Wants To Offer Internet Service in Future On Becoming Frugal - How a Big Spender Was Converted Your Estate Plan May Need Changing Because of Bill Likely to Pass Mortgage Rates at Three-Year Low Tardy Cruise Passengers Jeered As They Miss Their Ship's Departure Facebook Is a Haven for Fake Review Buyers and Sellers Look Inside Tom Brady's Mansion on the Market for "Only" $39.5-mil Bill Would Allow Contributions to Health Savings Account After 65, But... Cable Companies Now Less Likely to Let You Haggle Over Prices
Note: For blocked NYT and WashPost stories, clear their cookies. WSJ stories only accessible for 7 days.
Top Stories

Cars Most/Least Likely to be Stolen

A new study reveals which vehicles are most likely and least likely to be the target of thieves. Cars with big engines, luxury cars, and pickup trucks are the most likely to get stolen. But oddly, no one seems to want the BMW 3-series and the Tesla X and S models. Here are the full lists.

A new report lists New York City and San Francisco as the two urban areas with the highest cost of living in the country at twice the national average. Some cities in Texas proved to be the most wallet-friendly. Here are the top and bottom 10 urban areas. The cost of living index is based on six component categories – housing, utilities, grocery items, transportation, health care, and miscellaneous goods and services.

U.S. News is out with its latest list of best frequent flier programs and hotel loyalty programs. This year, Alaska Airlines takes first place, followed by Delta's SkyMiles program. At the tail-end of the list was Spirit Airlines (no surprise). For hotel reward programs, Marriott Bonvoy edged out Wyndham Rewards by a mere hundredth of point. See how the other hotel programs ranked.
Consumer World Original

Occasionally we examine the fine print in contracts that consumers have to sign. This time it is a very one-sided agreement that contestants in the CBS program Big Brother have to execute which contains some unbelievable terms. That is our Mouse Print* story this week.

NOTE: We only feature free stories that are fully readable. If you are blocked, try a different browser and clear NYT and WashPost cookies from it. Other newspapers may block you based on your repeated use of their site, or convert previously free stories to pay stories without notice. 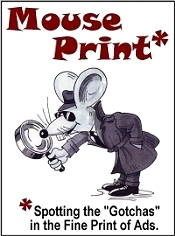 
Bargain of the Week

For Amazon customers who have never purchased gift cards from them, here is an opportunity to get a 15 dollar account credit

when you buy $50 in Amazon gift cards. The credit you receive is good towards a future purchase of items sold and shipped by Amazon until February 2020. If you have previously purchased Amazon gift cards, you will see a notice that your account is not eligible for this promotion. Thanks to Dan K. for the bargain tip. ++

A new study by Consumer Reports reveals that over one-third of routers tested lacked security protections that others had. Routers take your Internet connection and send the signals around your home so you can connect your computers and cellphones wirelessly. The magazine also suggests ways to make your current router safer.